skip to main | skip to sidebar

Custodian of the Tiara of Traffic 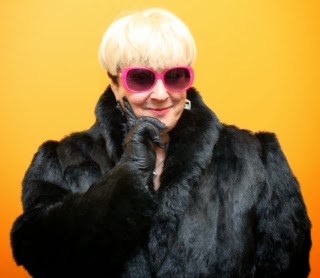 Wearing a heavy coat indoors? It's Cleveland, folks. Of course we do! 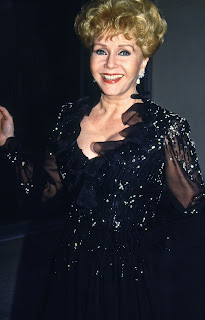 Debbie Reynolds died Wednesday, December 28, at the age of 84. Some years ago, she visited WCLV.  The plan was for me to interview her live, and afterward she would go to an adjacent studio to record two interviews with other local radio hosts to be broadcast on other radio stations in Cleveland.

That morning, on WCLV, Miss Reynolds talked about her time at a Warner Bros. radio station, where the bosses felt she could cultivate her speaking voice.  She also talked about the famous couch scene in "Singin' in the Rain," which she said was filmed in one take.

She graciously helped introduce the Movie Quiz. She said, "I was in this movie, which is about American history." The movie was "How the West Was Won."  When I finished taking the call from the winning listener, I said, "Would you like to talk to Debbie Reynolds?" and handed the phone across the console. Miss Reynolds spoke with the WCLV listener for a minute or so and handed the handset back to me.

As it happened, the other announcers were late, and although after the interview I offered Miss Reynolds a chance to sit in our vestibule and wait for them, she said no, she'd rather sit in the control room, which she did for a half hour.

Having learned radio in the days when engineers cued up records and gave the announcers their cue to talk, she said she was fascinated watching me operate the audio console buttons, start the CDs, fade and out of music, play spots via the computer, and handle all the spoken business required of present-day radio announcers.

The other announcers never showed up, and Debbie Reynolds had a half hour of quiet time in the WCLV control room.

Posted by Jacqueline Gerber aka WCLV's "Queen of the Morn" at 9:41 AM 1 comment:

Most of the music that you hear on WCLV is played by clicking on a computer cut on a screen in master control. We still have the thousands of CDs.  It's just a lot quicker to click on a cut than to (1) open the CD case; (2) press "open" on the CD player; (3) wait for the drawer to slide out; (4) load in the CD; (5) wait for the CD to slide back in before you (6) push the button for the track you want and (7) wait for that track to show in the display. You know this from your own CD players.

A volunteer is helping us enlarge the number of on-air music selections by adding computer cuts from older CDs in our library.  Recently I asked him, after he'd been working with us for three months, whether he had any observations about what he had seen here.

On the air, we don't detail all that is done to produce what you hear, much the same way that the host at Thanksgiving doesn't describe all the preparations once you arrive for dinner.  The turkey, ham, stuffing, sweet potatoes, green bean casserole and pumpkin pie are there for you to enjoy. You shouldn't have to listen to a litany of preparation stories.

The volunteer added, "I used to think that you guys were just reading the newspaper and drinking coffee and every so often, announcing the music."

I replied, "We make you THINK we are."

Wednesday, January 20, the "Sousalarm" just before 7:00 a.m. was Frank W. Meacham's "The American Patrol," which dates from the 1800s, and which later became a hit record by the Glenn Miller Orchestra.  An Oberlin WCLV listener called and said (1) she keeps track of every Sousalarm on WCLV; and (2) I also played "The American Patrol" on January 20th last year. She thought I should celebrate on hitting the same date two years in a row.

Celebrate?  Perhaps not. It was a coincidence, after all.

More importantly, how many OTHER things in morning drive do listeners keep track of?  You are all full of curiosity and intellectual vigor. I wouldn't underestimate any of you.


Posted by Jacqueline Gerber aka WCLV's "Queen of the Morn" at 2:24 PM No comments:


When the fire alarm goes off by accident during your on-air shift, you must (1) figure out how to back announce the current musical selection between the ear-splitting "beeps"; (2) jettison the news and weather until the alarm stops; you'd get drowned out anyway; and (3) stay in the control room while the alarm frays your nerves.  This happened last week when the fire alarm panel malfunctioned somewhere in the bowels of the building.  After 15 minutes of every-two-second beeps, the alarm stopped, only to sound intermittently at irregular intervals for another 15 minutes.

After one break, a listener called, assuming that I was holding a contest to guess the sound. I told him there was no contest, only a malfunctioning alarm. All this points up that if there was a real fire, the show must go on. The announcer is obliged to stay in the control room until the flames lick at her shoes.
Posted by Jacqueline Gerber aka WCLV's "Queen of the Morn" at 1:08 PM No comments:

I just had to do it. Some people buy snazzy cars. Re-doing the hair is cheaper.
Posted by Jacqueline Gerber aka WCLV's "Queen of the Morn" at 11:24 AM 2 comments:

Hosting morning drive puts you at odds with everyone else's schedule. Breakfast is well before 6 a.m., and lunch at 10 is too early for most establishments to serve a lunch menu. So you eat breakfast at 10 a.m., which is really your lunch, eating from the lunch menu later on is really your dinner, and so on. It takes about two years to adjust to the schedule you must maintain in order to host morning drive. In that period, you live in a constant state of jetlag. If you go out at night, and one should now and then, lay out your clothes before you go to bed, and make sure your car has plenty of gasoline, because it's quite possible that you will oversleep the next morning. In that case, you will be obliged to jump into, or throw onto yourself, the previously laid-out wardrobe, and you will leap into the car and set off for work without checking whether you have enough fuel to get there. And how many gas stations in downtown Cleveland are open before 6 a.m.? A few -- it pays to know which ones well in advance.
Posted by Jacqueline Gerber aka WCLV's "Queen of the Morn" at 3:27 PM No comments:

Hosting morning drive requires you to live 4 hours earlier than the listeners. For example, if you wake up at 6:30, the announcer wakes up at 2:30. If you go to bed at 11 p.m., the announcer goes to bed at 7. This means the announcer's dinner is at 2 in the afternoon, while yours is at 6. Going out at night is a rare treat, generally only on weekends, but even so, the body demands a nap on those occasions. I won't kid you -- to stay home when the rest of you are out at concerts and plays is a killer. But one must decide in favor of preparedness. I do make exceptions for important events. A recent example is getting to meet WCLV's "Idea Leaders" following a recent Thursday night Cleveland Orchestra concert. Another was attending a local theater tech rehearsal. Another is attending opening nights. All of them important, to the listening audience and to the organizations who value the presence of WCLV's on-air hosts.
Posted by Jacqueline Gerber aka WCLV's "Queen of the Morn" at 10:42 AM No comments: